Solar power is on the rise. Learn to work safely around it.

If you work on or around building exteriors, you are more and more likely to encounter rooftop solar installations. Small-scale solar systems at ground level are also increasingly common. Learn to work safely near solar equipment to prevent costly damage and dangerous electrical contacts.

A solar power system can generate enough electricity to injure or kill if it passes through a human body. These systems are being installed by dozens of different companies and even by DIYers, so there is no one standard setup for all installations. Learning to recognize the typical components of these systems will help you work safely around them. Here’s an overview:

Solar power systems can carry live electrical current even when the sun is not shining. So no matter when you are working, you’ll want to know the entire route that electricity from the PV system travels. Before beginning work, ask the building owner or manager to point out the arrays and all related equipment.

Once you know the location of system components, keep ladders, tools, supplies and equipment away from them. Do not place cans or tools on or near solar arrays, and avoid contact with cable conduits and/or pipes. If possible, maintain a 2- to 3-foot safety perimeter around PV panels.

Before starting any job, locate solar power components so you can stay a safe distance away from them. 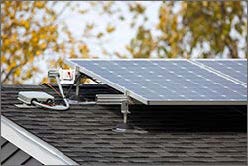 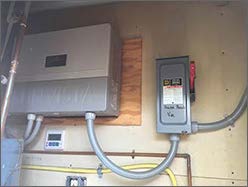 Conduit carries electricity from PV arrays to an inverter mounted in a utility closet. At right is a DC disconnect.

Solar power systems come in two basic types, depending on whether the electricity they produce flows into the electrical grid, or into a bank of batteries for local use:

Solar equipment for all system types is found on building exteriors and indoors.
In any PV system, wires from multiple panels are gathered through a combiner box whose output cable runs through a conduit down from the roof to an inverter. For a grid‑tied system, the next point on the circuit is a disconnect switch that can be opened by utility personnel. This switch isolates the PV system from the grid in order to safely work on grid equipment. Next on the circuit is the utility’s electric meter. Meters and disconnects are usually located on the building exterior, while inverters are typically inside a garage or basement. For buildings with multiple meters, such as apartments and condominiums, meters may be located indoors.

For a standalone system, the conduit will lead from the inverter to the battery bank, currently always located indoors (garages are a favorite spot). But again, electrical storage technology is evolving very fast, so when working around a building with off-grid solar, be sure to ask where the bank is located and where the conduit or cable bundle enters the building.

Be alert for combiner boxes, inverters and meters. Off-grid systems also use batteries. 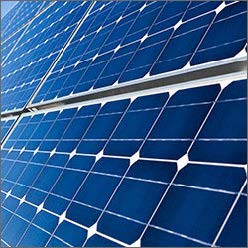 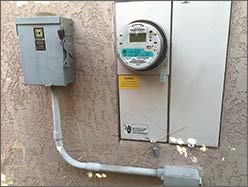 This grid-tied system integrates a “time of use” smart meter on an external wall. At left is an AC disconnect.

Rooftop PV arrays and their associated cables and equipment are easily damaged.
If you’re performing gutter or downspout cleaning or repair, exterior painting or plastering, or any other work that takes you near a solar rooftop, keep these tips in mind: 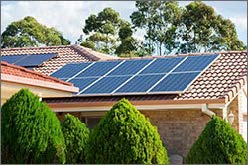 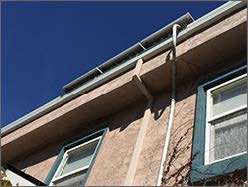 Take care around rooftop thermal systems as well.
Rooftop thermal systems are used to heat water. The simplest ones, often called “passive thermal,” move water through an array of narrow pipes on which sunlight is focused through glass. Other types, collectively called “active thermal,” use a pump to move the water through the pipe system. Take care around these installations and their input and output pipes.

PV is also found on the ground.
People who can’t put PV panels on their rooftops—because they’re renters, or because their roofs lack the right sun exposure—may place a PV array on a section of their own lot that gets better sunlight. And some neighborhoods have developed “solar gardens” with PV arrays shared by many users. These systems include similar equipment to rooftop PV, but it’s located at ground level or buried under the earth.

When PV is on the ground, be alert for cables underground.
Unlike the underground power lines belonging to electric utilities, buried cables that carry electricity from ground-level PV arrays to homes and businesses may not be recognizably marked.

So if you’re digging or moving earth in any way near a ground-level PV array, you’ll need to do your homework and conduct your work with care. Call 811 well in advance of digging. Also be sure to consult property owners regarding the location of buried electric cables, so you can dig a safe distance away from them. 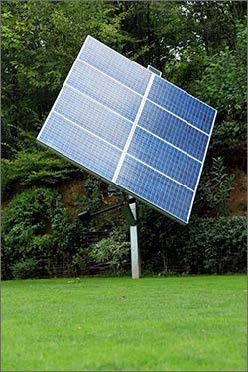 If you must dig or move earth in any way near a ground-level solar system, call 811 and check with property owners to locate underground electric lines.

Building-integrated thin-film PV is the wave of the future.
By now, everyone knows what a photovoltaic system looks like: an array of flat glass-fronted panels on a rooftop or on slanting mounts at ground level, right? Well, yes. But a group of new technologies known as thin-film are changing that.

Conventional PV cells are made of silicon crystals, so they’re rigid. Thin-film cells are much smaller. This allows the material that contains them to be flexible and sometimes almost completely transparent. They’re not yet as efficient as crystal cells, but they can be used in many more ways. Some of these are even manufactured into the materials of the building itself.

Thin-film rooftops: Watch where you tread.
Thin-film PV may be used in glass-fronted panels organized in arrays. It can also be rolled out and laid like tarpaper in polymer sheets that can cover entire rooftops. It typically looks like long rows of shiny rectangles. Harder to recognize on rooftops are another recent innovation: thin-film technology applied to individual shingles and tiles.

Particularly on new buildings, you’ll want to know if these materials are being used. They are durable, but shouldn’t be walked on. And all the same precautions about cables, conduits, inverters and other equipment apply. 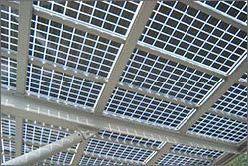 PV panes: Handle with care.
Another thin-film application is in multi-paned windows, glass canopies or curtain walls. The PV film is sandwiched between sheets of glass, which are connected together with hair-fine wires that run through the frame and then to a combiner. Although the actual cells in these transparent glass arrays are well protected, the inner wiring is relatively fragile. If you’re working near thin-film in glass, make sure ladders or equipment don’t bump into the surfaces.

If you work around newer homes or commercial buildings, look out for thin-film PV on rooftops and in glass windows or walls.